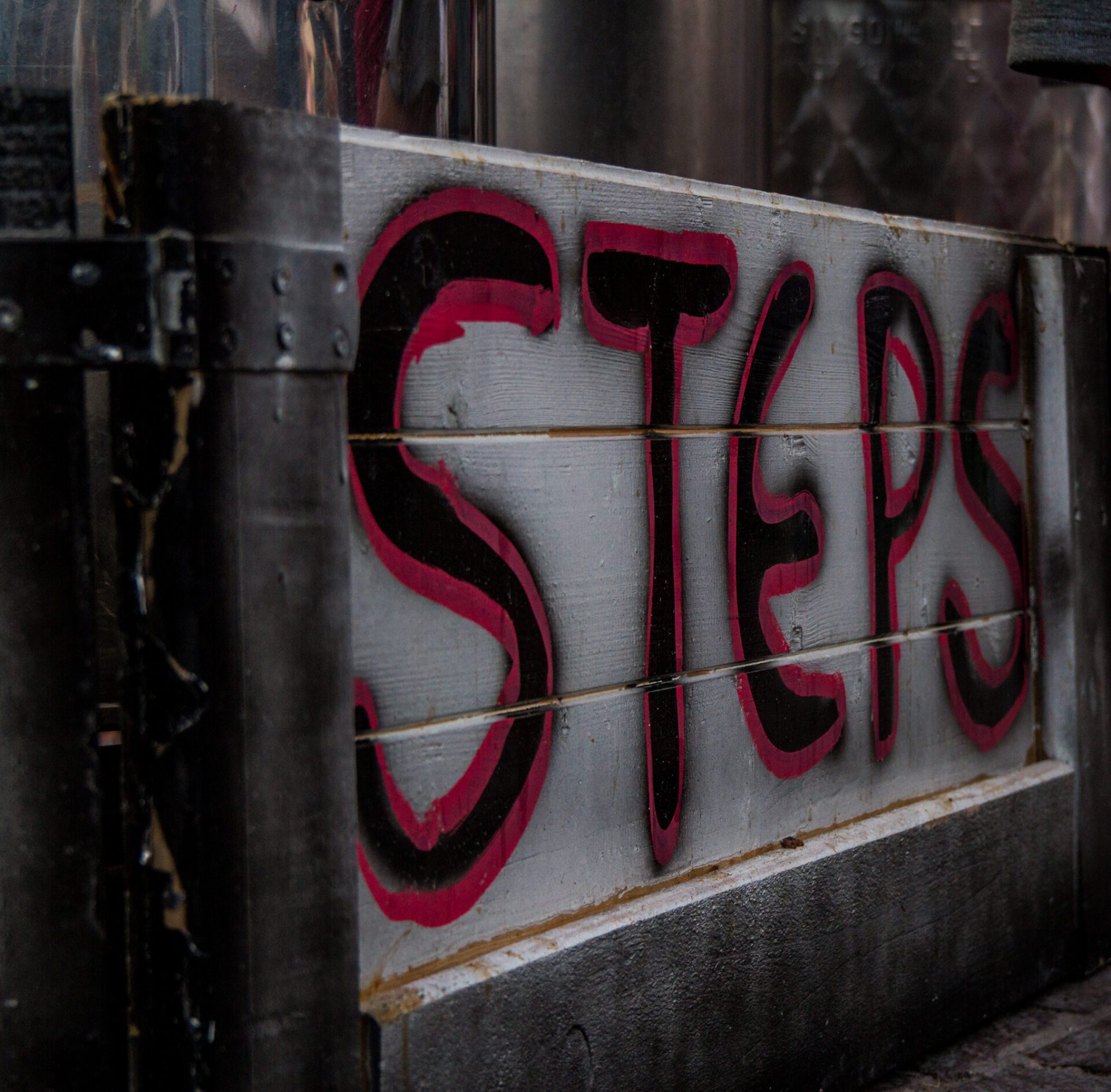 A whole new programme, totally different than any other legal aid programme, has recently began from HumanRights360 in partnership with Steps. The “Street Lawyering” programme is providing legal aid in vulnerable groups of people/persons who live on the street, such as homeless, users of psychoactive substances and sex workers.

Welfare state was created to balance society’s weaknesses. However, lots of socially marginalized people cannot address to state services for a variety of reasons, including their situation/status but also the structure and operation of the system. 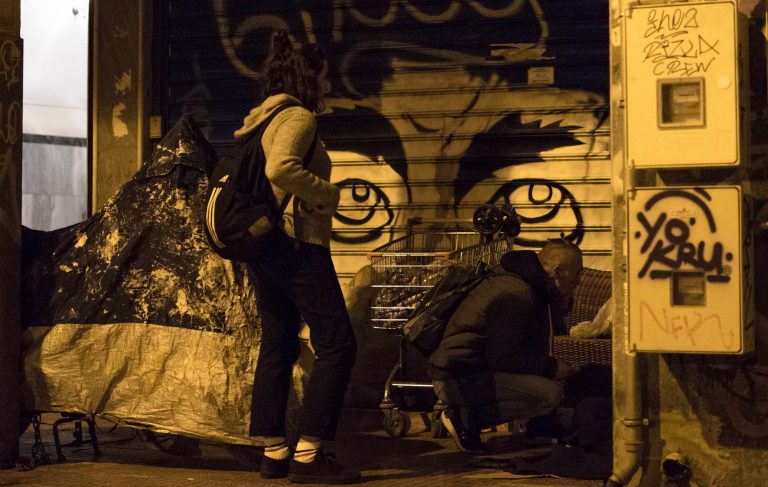 People in the bounds of wretchedness, victims of the financial crisis, drug users, sex workers, recognized refugees, migrants without legal documents in search for food, now can discuss their legal issues or other problems that in many cases may be responsible for the situation they are into and get information regarding their rights.

The aim of the action is the investigation of legal and pending issues of street-connected people which, apart from the personal burden, often are the cause of the situation they are in. An attempt to investigate and resolve these issues may be the first way out, the start for an overall integration, or even the reduction of fear towards the unknown; justice, police, administrative and bureaucratic procedures. At the same time, we aim to discuss with relevant stakeholders all the legal changes and possible interventions in order to improve access to rights and living conditions for homeless people.

Our lawyer, Katerina Pournara, participating in STEPS’s field team is in the streets in the center of Athens providing legal aid to the abovementioned vulnerable groups, three days per week. “Usually the lawyer sits on his or her desk providing advice or solutions already determined from the initial request. By inverting the common practice, in a world already moving upside down, we got out on the street to understand the truth, investigate the request, provide advice and assistance to people who at this point may not be able to ask for it”, she highlights on the work she has taken over through the programme.

Today, we claim the information, prevention and reduction of overdose and consequently the deaths it causes.

What is an overdose?

According to the IOAD, “[a]n overdose means having more of a drug (or combination of drugs) than your body can cope with. There are a number of signs and symptoms that show someone has overdosed, and these differ with the type of drug used. All drugs can cause an overdose, including prescription medication prescribed by a doctor.”

Deaths from drug overdoses remain higher than the annual total number of deaths from road accidents and AIDS, and their rapid growth in recent years has reduced overall life expectancy in the United States.
In the US from 2013 to 2017 the number of overdose deaths increased by 90%.
In 2017, 70,237 deaths were recorded in the US and 8,238 in EU member states.
4% of all deaths in Europe, between the ages of 15-39, are due to drug overdose.
Two out of three drug overdose deaths in 2018 were related to opioids (most of them due to a combination of drugs). The largest percentage is due to the use of synthetic opioids (fentanyl).
Deaths from illicit psychostimulants, such as methamphetamine, increased by more than 250 percent between 2008 and 2015 and by 33% between 2016-2017.
The COVID-19 pandemic period has also dramatically affected overdose deaths, with a record number of deaths in many US states and provinces, with concerns about a larger increase over the year.

Numbers and Recording of Deaths

According to the National Center for Documentation and Information on Drugs (EKTPN) there is a reduction in overdose deaths in the years 2005-2016, while a 50% increase is reported in 2017-2018.

However, the way in which deaths are recorded in Greece is the subject of intense criticism and controversy both nationally and internationally. Until 2017, the recording comes from the Drugs Department of the Public Security Department of the Hellenic Police and since then EKTEPN in collaboration with ELSTAT is investigating the issue further.

Greece is the only European country without official data in the EMCDDA (European Monitoring Center for Drugs and Drug Addiction).

Harm reduction in relation to drugs seeks to minimise the harm (prevalence of diseases, deaths, etc.), but without necessarily imposing the reduction of consumption. Some of its policies are:

The DCRs aim to promote the health of active drug users, protect the public health, prevent and intervene to address overdose, mobilize and link to treatment programs, promote social inclusion.

The creation of DRC was legislated in 2019, 6 years after the closure of ODYSSEA, the first DCR that OKANA had opened. However, today and being a year after the legislation, no action has been taken towards their operation.

Naloxone can bring back to life a person who has had drug overdose. It can be administered intravenously or in the form of a spray, inhaled through the nose. Within a maximum of 5 minutes after its administration, naloxone restores breathing and presents no contraindications at all.

In Europe, its disposal and administration as a harm reduction measure is a common and widespread practice (in DCRs and individually in Take-Home programs).

In Greece, naloxone is only available as a hospital drug and individual access is absent even from national drug planning.

The provision of clean injectable material by street-workers is a limited but existed practice in Greece. Outreach actions are usually carried out by KETHEA, OKANA, KELPNO, and other Civil Society organizations.
The supply of inhaled material is completely absent from the Greek field, although the use increases sharply and alongside the subsequent deaths. In Athens, we observe a dramatic increase in the use of “sisa”, that is crystal methamphetamine of questionable quality, that deteriorated health rapidly.
The provision of harm reduction kits lacks institutional coverage. The organizations that provide them act under an uncertain legal framework.

‘Good practices’ are numerous internationally. The only one responsible for overdose deaths is the state and the policies that have been pursued for the last 30 years, at least.

Political parties may alternate, but death policies remain, targeting and stigmatizing people. Social stigma and repression increase the risk of death, as it isolates and marginalizes the person who does not have substantial access to public health, treatment and information services.

During the last year, the repression – mainly on the occasion of the COVID-19 era – is the main narrative of an authoritarian government whose only concern is its image.

The lives of people who make problematic use of psychoactive substances count!
Press Release in .pdf here | Contact details here.

By admin
Manage Cookie Consent
To provide the best experiences, we use technologies like cookies to store and/or access device information. Consenting to these technologies will allow us to process data such as browsing behavior or unique IDs on this site. Not consenting or withdrawing consent, may adversely affect certain features and functions.
Manage options Manage services Manage vendors Read more about these purposes
View preferences
{title} {title} {title}